First incorporated in 1994, Summerfruit NZ is now over 25 years old. Much has changed in this time and more changes are coming.

At 25 years old, we think it's a good time to review the organisation – our structure, capability and governance, plus the work that we do for our stakeholders. So Summerfruit NZ is conducting a review to consider these changes and help us be ready for the next 5-10 years.

On 1 July members were sent Alasdair MacLeod's independent industry review Becoming fit for purpose in an uncertain world and the Summerfruit NZ Board's consideration of the review.

The Board looks forward to hearing members' views either directly, or through initial discussions at the AGM on 15 July. Further consultation will continue following the AGM.

The Summerfruit NZ Board appreciates the time taken by those who met with Alasdair or responded to the review survey. Like you, we had hoped that the review timeline could have concluded sooner, but as we all know Covid-19 has played its hand, both for our businesses and for Summerfruit NZ.

The Board has received the initial report from the reviewer. We have carefully considered the report and spent some time working through its recommendations, however we have more work to do on this.

The Board is unanimous in its response to the report and its recommendations so far. We are currently consulting others to test some of our thinking and also clarifying some of the recommendations with Alasdair.

We will come back to you as soon as practicable. The review and the Board’s consideration will be discussed at the AGM.

In the meantime, the Board welcomes any feedback you may have from the review interviews.

The independent industry review report is nearly complete after having been delayed due to Covid-19. Last week the Summerfruit NZ Board agreed to the process to take forward the report. That process is:

Alasdair noted to me the excellent discussion with those people he interviewed, which will give the Board and me plenty to consider as we develop the future options for Summerfruit NZ.

The initial draft of the report has been completed, and is on its way to the Steering Group. Because of the Alert Level 4 that we have been under for the last four weeks, I have not been able to complete all of my interviews. However, with the proposed reduction to Alert Level 3 next week, I am hopeful of getting the last few interviews completed by phone, and I am hoping to have the final report to the Summerfruit NZ Board in around two weeks' time.

I have now completed the vast majority of grower interviews – by the end of this week, I will have completed that phase of the review. I have been impressed by the openness of the participants, by the thoughtfulness of their responses, by their pride in their operations, and by the consistency of a number of key themes that have emerged.

For the final phase of the interviews, I will be interviewing selected participants from MBIE, MPI, two more 'product group' organisations, and possibly, a Regional Council. Once those interviews are complete, I will synthesise the data and produce a draft report for the Steering Group. Following discussion with the Steering Group, and fact checking any issues that may emerge, I will issue a final report for the Board.

I’d like to thank all those people who have taken the time to participate in the review.

The first trial interview with a grower has been done, as well as the first trial interview with an external organisation. I have deliberately kept away from growers while you are busy with your seasonal peak, but over the next week a number of you will be contacted to arrange a time when I can meet you for individual interviews. Each interview takes a round one and a half hours – I appreciate that you are all busy people, but I want to learn as much as I can about what is important to you over the next 5-10 years as growers/packers/exporters.

It is worth pointing out that the initial contact to set up the times will be from Summerfruit NZ. This is for efficiency reasons, and it has no impact on the independence of the process. Once interviewees have been contacted, the online questionnaire will be published on this website and announced in Prunings.

The independent review of the summerfruit industry is now underway, with interviews expected to start in Hawke’s Bay later this month (and into January), and with the grower interviews in Central Otago expected to commence in early February. In addition, interviews will be scheduled with a number of other product groups within the wider horticulture sector, as well as interviews with regulators (MPI and MBIE), Horticulture Export Authority, and Horticulture NZ.

The driving force behind the review is the desire of the Summerfruit NZ Board to gather enough data (predominantly from levy payers) to enable them to design/refine the organisation so that it remains 'Fit for purpose in a changing world'. The review will provide input on governance, organisational capability requirements and future directions.

It is important to realise that, while the review focuses on the future and will hopefully move things usefully towards an organisation that is fit for purpose in a changing world, it is not a silver bullet. No review is ever going to get everything right to everyone’s satisfaction.

Alasdair MacLeod has been appointed by a Summerfruit NZ steering committee to carry out the summerfruit independent industry review.

A retired partner at Deloitte NZ, Alasdair has specialist skills in economic development, strategy facilitation and business growth. He also describes himself as ‘an (accidental) avocado grower‘. 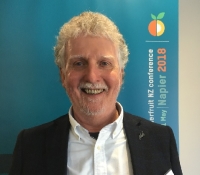 He is a former civil engineer who has worked here and overseas in the electricity industry, the information technology sector, and in business consulting. While at Deloitte he led national strategy projects in the primary sector, and has since led the development of the Hawke’s Bay Regional Economic Development Strategy.

Alasdair chairs several boards, including the Hawke’s Bay branch of Export NZ. He is a former chair of Tomatoes NZ where he was heavily involved in developing their strategy, which had to encompass the aspirations of domestic growers as well as those more focused on export; and also had to navigate the challenges of widely differing aspirations and capacity between small family-owned operations and those that were part of larger corporate entities.

Over the next few weeks the Summerfruit NZ steering committee will finalise the terms of reference for the summerfruit industry review, due to be completed in time for consideration by the Board at its April meeting.

Alasdair has outlined the broad steps he will be following:

The review findings will be presented at Summerfruit NZ’s annual conference in May 2020.

Prunings will have updates on the review, once the terms of reference are finalised and Alasdair gets underway.