Monolinia/Botrytis/Alternaria – What are the differences?

Richard Mills gets a little nerdy finding some cherry disease compares and contrasts.

The photograph below shows all three diseases on cherry fruit that sat on the kitchen bench last year. But which is which do you think? 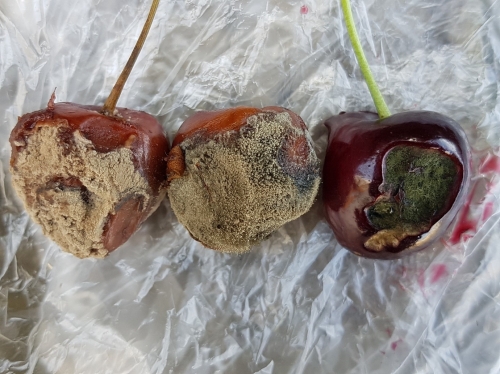 Here’s a couple of definitions to get us going…

A comparison of some of the generalised characteristics follows.

It is suggested that the necrotrophic fungi are more able to exploit natural plant defence systems where plants attempt to wall off infections.

Some of the biotrophs that we know include powdery mildew, rust and our old mate brown rot. Necrotrophs are Botrytis and Alternaria which might not be too surprising after reading the general characteristics.

Brown rot was first identified in New Zealand by a Mr Kirk in 1905 and by 1915 was regarded as an important disease. As a problem disease it has been studied in Europe for 150 years and the Americas for 100 years and we still don’t have total control. The susceptibly of stone fruits in decreasing order seems to be apricot then sweet cherry, nectarine, peach, sour cherry with the least susceptible being plums. If the plant surface is wet for more than 24 hours, then temperature is largely irrelevant. Optimum temperature for infection is said to be 13-25˚C.

Grey mould or Botrytis likes the conditions to be moist and humid and standing water on a plant surface can be enough. It prefers a low pH and can secrete organic acids which enhance cell wall degrading enzymes and inhibit stomal closure. Temperature for infection is 19-24˚C.

Alternaria or green mould is ubiquitous in the environment and seldom a real problem for us. That said it is reported to be responsible for 20% of agricultural losses worldwide. An Alternaria spore that lands on a leaf will wait until nightfall when the humidity rises; it then germinates and can penetrate the host in 12 hours. And like grey mould, Alternaria can produce toxins that diffuse into the host ahead of infection. Optimum temperature for infection is 12-30˚C.

So, which of the diseases is which? 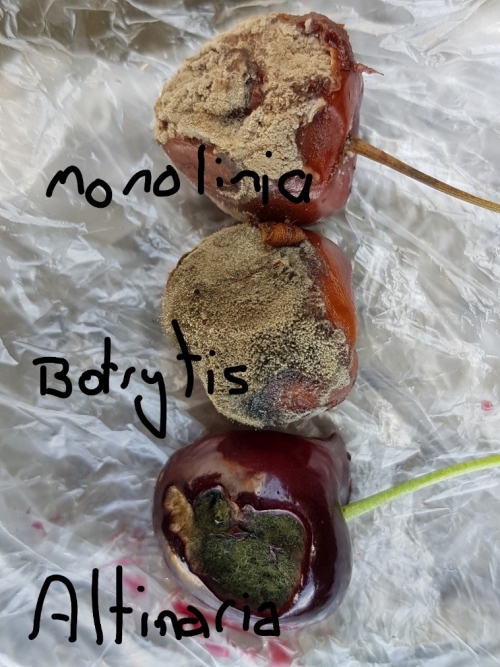 Good luck for the coming season.