A summary of some points that may affect summerfruit growers

Earlier this month, Richard Mills attended a Symposium on the brown marmorated stink bug (BMSB) in Napier and wrote the following report.

An all-day symposium on one insect that is not even in the country might seem a bit over the top, but this was a great opportunity for the science community to share what they are working on and to draw on the experience of people working in the USA, Italy, and Chile. It was also a good chance for me to come up to speed on the summerfruit industry’s behalf and indulge my inner geek.

BMSB are intercepted at the New Zealand border every year. A seasonal surveillance programme is in place to try and detect BMSB if they arrive, and monitoring is conducted using pheromone traps in conjunction with herbage inspections around the traps. We’ll come back to the herbage inspections in a bit. There are now two dogs trained for the detection of BMSB as well. Other types of sensors are being developed, as are potentially improved versions of the physical traps.

Should BMSB become established here it seems as though stone fruit (peaches were mentioned specifically) are a preferred host. Fifty percent damage has been reported in USA peach orchards and 30-50% damage in kiwifruit orchards. Offshore research is being funded by a number of industry parties, and what works for them may well apply to us.

It seems as though much of New Zealand would be climatically suitable for BMSB and that hot rather than cold would be the limiting factor. Some USA observations suggest that northern Florida is suitable but not so southern Florida. BMSB is found in Canadian production areas.

While an established population would be really serious for fruit and vegetable production, we think there would be a chance to gain some control. BMSB is a landscape-wide pest with potential to affect almost all fruits, possibly including native plant species.

So, what could we do if a population was to become established, and it was deemed that control rather than elimination, was the reasonable response? The good news is that the options are being worked on now, and we have the experience of the likes of the USA, Italy, and Chile to draw from. There will be no silver bullet to control this pest, and any chemical response would likely involve hard chemistry that will set our IFP technology back decades. Apples have pretty much achieved residue free fruit and summerfruit would like to be there soon, but, up to six applications of something like Mavrik is not the direction of travel that we desire.

The ideas and technologies that are being worked on include:

So, what might a bit of medium-term planning look like if I was a cherry grower in New Zealand? The more intensive orchards that are netted might look to replace the side netting when the time comes with a version that will keep out stink bugs. Apparently, the top of the cage is less important as fewer bugs go up and over.

The use of trap crops around the orchard is worth a thought. Maize is a preferred host, grows well in Hawke’s Bay and summerfruit is well and truly picked and gone by maize harvest time. Whether the maize is harvested and sold, or sprayed with heavy duty insecticides needs some thought. What a Central Otago trap crop might be I’m not sure, but it can’t be too difficult.

But if my crop is not netted, or there is not enough value to cover the fruit, what then? Perhaps the maize or trap crop becomes even more important, like a no-net netting. Insecticides would more likely be a key part of control, perhaps in the maize and the first row or two of peaches and lots of monitoring to know when the movements start and where they are coming from. We will need to learn where the alternative hosts in the neighborhood are and how BMSB on them might be controlled.

We are fortunate in that BMSB is not yet here in New Zealand, that we have the experience of overseas growers and scientists to draw on, that there is a big team in New Zealand working on control measures, and that border security to this point in time has done its job.

A note on the biosecurity levy

Our Biosecurity (Readiness and Response—Summerfruit Levy) Order 2019 came into force on 1 November 2019. At the 2020 AGM summerfruit growers voted in favour of setting the biosecurity levy rate at 0.05%. This is the first time the biosecurity levy has been implemented and will allow Summerfruit NZ to collect the necessary funds to face any future biosecurity incursions affecting our industry. While we did have limited reserves available to cover biosecurity responses, unfortunately in the case of fruit fly, these responses have become increasingly frequent and can no longer be sustained in the same way.

Exotic pest incursions can disrupt orchard operations, lead to market access restrictions and impact on fruit production and quality. The best scenario is early detection which gives us the best chance of eradication. However, eradication is not always possible and being prepared to effectively manage a high impact exotic pest is important for production and export continuity.

This is the work that Summerfruit NZ supports as a partner to the GIA on behalf of growers. This work involve minimum commitments, which include participation on the decision making and sharing the cost of readiness and response activities with government and other industries.

In general terms, the biosecurity levy can be activated for any of the following three reasons:

Any changes to the levy rate are to be discussed at an AGM. 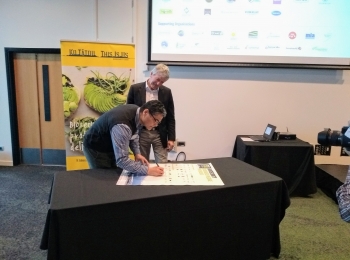 Under this pledge, Summerfruit NZ is committed to playing our part as a support organisation in the efforts to prevent pests and diseases from getting into New Zealand or helping to stop the spread if they arrive our country. Our pledge is to be an active part of New Zealand’s biosecurity team of all New Zealanders by integrating proactive biosecurity practices into our operations and supply chain.

Photo: Biosecurity and export manager Juan Rosales signs the pledge on behalf of Summerfruit NZ while the Minister looks on.

Presenters included speakers with international experience in the management of these pests:
Dr Claudio Ioriatti from Italy and Dr David Bellamy from the USA – now based in New Zealand. Along with the international speakers there were also presentations from recognised specialists from PFR and MPI.

The meeting was an important opportunity to learn more about these biosecurity threats not currently present in New Zealand, how they are being managed overseas and what work is being done to minimise the impact these pests may pose on our horticultural industries.

Below is a summary of the main points from the meeting. 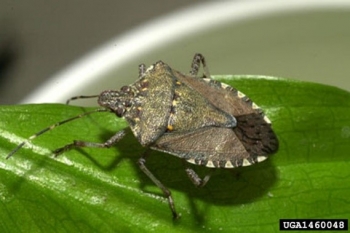 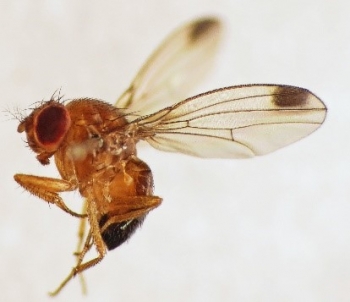 After the meeting, Richard Mill and Juan Rosales from Summerfruit NZ were invited to participate in a workshop to learn about industry views on the matter and the work industry bodies are doing in preparation for a possible incursion of any of these pests.

More information can be found on the Summerfruit NZ website under Biosecurity.

The Brown Marmorated Stink Bug (BMSB) is one the biggest biosecurity threats facing New Zealand and is frequently intercepted at our borders. It has the potential to cause significant economic damage to the horticulture industry and to home owners due to its invasive nature.

The BMSB Council made an application to the Environmental Protection Authority (EPA) to release the Samurai wasp to help combat a BMSB incursion should one be found in New Zealand.

Following approval from the EPA, the Samurai wasp (Trissolcus japonicus) can now be used to fight BMSB in the event of an incursion.

The BMSB represents one of the highest risk biosecurity threats to New Zealand. Several industry groups, including Summerfruit NZ, made an application to introduce the Samurai wasp as a biocontrol agent for this pest and a decision on this request was reached late August 2018. According to the EPA’s decision, the Samurai wasp may only be released in New Zealand after a stink bug invasion has been detected, and only at the location of the incursion. This is an extremely important achievement for horticultural industries and will be a very important tool in preparation for the effective and sustainable management of a potential BMSB incursion. 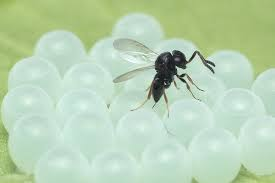